Skip to main content
May 01, 2019
Pulitzer prizes - Cartoons and Photography

"The Nobel of Journalism", Pulitzer prizes celebrates the best work in media and arts in USA. Most of the topics are politics, which I try to avoid in my articles, but I found some interesting one about society and humanity.
Cartoons are far of being the superstars in Pulitzer awards. The main attention is on articles from newspaper and most famous - the photography. I saw a lot of powerful photos that reveal the pain, fear and all the disaster made by wars in general. I choose to post here two well-known images, awarded in 1992 and 2007.

Kevin Carter, originally from South Africa, had visit Sudan and in 1993 made the famous photo. One year later, in April won the Pulitzer prize and in July same year he suicide. Many speculations appeared, trying to rely the stories. Alberto Rojas, a Spanish journalist met the other photographer who was in Sudan with Carter in Sudan in the same time. Following the story, he found out that the girl was actually a boy who survived in that particular moment, but who died in 2008. More about story on Howafrica.com

A heart-breaking photography with a single mom and her son who, soon after this photo had lost the battle with cancer.  In this picture, his mother is distracting successfully his attention before a medical procedure. Still an impressive image, the symbol of pure joy and hope, being distributed worldwide mass-media. Renée C. Byer has more amazing photo and humanitarian campaigns. More about her work>> 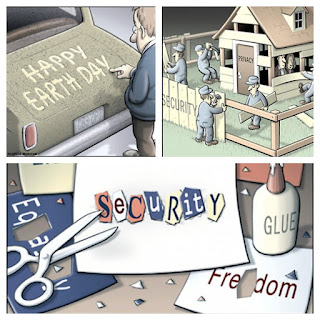 Ramirez has a lot of political cartoons, in humorous and satirical style, but the one below it's more than that. Fire in the forests make big tragedies all around the world and firemen save a lot of lives, risking a lot. More than heroes. 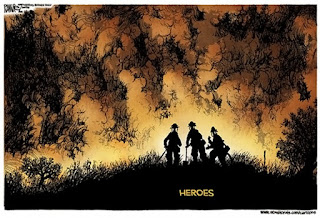 Cartoonist with a lot of experience, with a portfolio in political drawings.  In this awarded image, it is very well illustrated a global trend in politics that unfortunately seems to be back. Jim Morin's caricatures on GoComics. 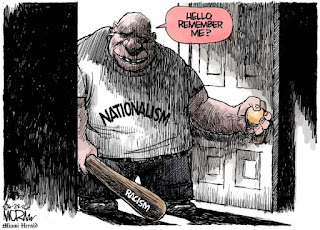